Moorhen feeding chick, on a raft on the village duck-pond, April 2017 : 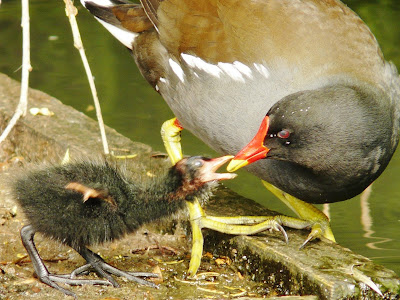 Murder in the Academy 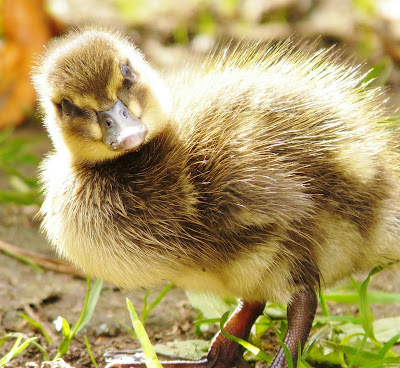 Ducks are not as daft as they look. Not by comparison with philosophers. To see how daft philosophers are, you only have to consider the Trolley Problem. Here are four versions of it, called Transplant, Footbridge, Lever and Tiger.

One of your friends is a doctor, and three of her patients will die within the week if they do not get transplants. One needs a heart, and the others each need a lung and a kidney. And it is not that they will probably die. They will definitely die.

You also know Mr E, whose organs are perfectly compatible with those three patients. If they had those organs, all three would go on to live long, happy and productive lives. As it is, not only are they dying within the week, Mr E does not have much to look forward to either. He works in a zoo but he does not like animals.

The question is: should you kill Mr E? If you do, you will be able to deliver the corpse to your friend the doctor, who will be able to operate successfully on her three patients. You will commit a perfect murder, and have a fake organ donor form to give to your doctor friend along with the body. You will be able to walk away with no untoward repercussions.

The answer is: No. Murder is wrong, and you should not do it. There is nothing complicated about this scenario. Almost everyone who hears this version of the problem agrees that the answer is "No." I suppose that it could be argued that, because killing in self-defense is allowed, you should be allowed to kill an innocent person in order to save three lives. But that would be daft. And you would think that a philosopher would know why. But the following version of the problem seems to confuse them.

You are on a footbridge over a bend in a railway track. Three people are working on the track on one side of the bridge. They cannot hear an approaching train over the noise of their equipment. From where you are you can see it coming from the other direction. It will pass under the bridge and then hit those three workers, who have their backs to you. It will not be able to stop in time. It will kill all three.

There is also a fat man, Mr E, sitting on the edge of the bridge, eating some sandwiches and thinking about going back to work. You happen to know that if you pushed him off, he would land on the track in front of the train and slow it enough for it to stop without killing any of the workers, although he would die instead. Again, no one would have to know what you had done. You could push him off, to save three workers, and be on your way with no one any the wiser. Should you push Mr E off?

It would of course still be wrong to murder Mr E. Imagine if you did not know that! And yet a lot of philosophers think that you should push the fat man off the footbridge. It is not that they think that murder is alright. It is that they do not realise that that is what the question is asking. That is because these problems are usually presented in the opposite order: Lever first, then Footbridge.

This is a lot like Footbridge. The only difference is that instead of a bridge there is a side track, onto which the oncoming train could be diverted. The train would go straight on, onto the side track, instead of going round the bend in the track, towards the workers.

You are standing by the bend, where there is a lever that controls where the train will go. You can see the workers in one direction, and the train that they cannot see (or hear) in the other. In this version, Mr E is sitting on one of the rails of the side track, eating his sandwiches and listening to some music. He is too far away for you to pull the lever, diverting the train onto the side track, and then run to him in time to warn him. And the workers are also too far away for you to warn them. So, three people will die, or just one. Should you pull the lever killing Mr E?

This is so similar to the other versions, it should be obvious that the answer is again "No." Otherwise you would be killing one person, instead of killing no one. You would not be choosing the lesser of two evils (one person dead instead of three), you would be choosing the greater of two evils: murdering someone instead of watching three people get killed by a train (while you try and fail to think of some other way of helping, presumably).

A lot of philosophers think that the answer in this case is "Yes." When people consider Lever, it seems that they naturally see it as the question "should three people die, or just one?" They tend to think that it is akin to allocating resources. Or perhaps they think that the lever should have been manned by someone who should choose to save the most lives (much as Churchill was not wrong to order the bombing of Dresden), and that they would simply be filling in for that absent person.
You might think that philosophers would cut through the natural mistakes to the actual facts of the matter. But in fact, because Lever is usually presented before Footbridge, quite a few of them carry the wrong answer over, from Lever to Footbridge. Even when they are given that version, which naturally makes people think of murder, not the allocation of resources, they continue to think that the answer is "Yes."

Some philosophers do notice that those two versions are significantly different. But then they tend to imagine that they have some evidence for a half-baked "philosophical" explanation of why they are different. Not many of them go back, from Footbridge, to revise their answer to this version; and of course, they should do that, because these two versions are not actually that different. My final version emphasizes their similarities.

I would be tempted to. I could always say that I did not know that Mr E was in the pit; and I would not just be watching three children being savaged by a tiger. So, this version is a lot like Lever. Still, even a murder that I feel to be justified is still a murder, I suppose. One explanation of why Footbridge is different to Lever, given by several philosophers, is that in Footbridge you are primarily killing a man, only incidentally saving some others, whereas in Lever you are primarily saving some men, only incidentally killing another.
Had it been the case that you did not know that Mr E was still in the pit, then it would have been alright to remove the board covering the pit: you would only accidentally have caused his death. But similarly, if you did not know that the children were at the end of the tunnel, then it would have been a bit cruel to remove the board. You would have been dropping the tiger into a pit for no reason, only accidentally saving some children. But in all versions of the Trolley Problem we know what will definitely happen if we choose to do something, and what will definitely happen if we do not. That gives us a relatively simple situation to consider.

The failure of so many of philosophers to understand such simple scenarios is not an insignificant failing. Philosophers claim to be our experts when it comes to thinking logically: many of them teach Logic. Some of them, following Kant, think that it is wrong to use someone as a means to an end. That is, it is wrong to use Mr E as a brake (or to use him as big-cat-food), although it is alright if he is in the way of a diverted train (or if he happens to be in the pit you are dropping the tiger into). And it is true that in Tiger you are diverting the tiger onto Mr E, not putting Mr E in front of the tiger. But surely it is daft to think that it matters much which one falls toward the other.

If you throw a spear at someone (or pull the trigger on a gun, or a lever to divert a train) and kill her, how are you murdering her less than if you deliberately push her onto a spike? Relatively less daft is what I took a break from philosophy to spend more time looking at: ducks, on the village duck-pond. In this photo, a pair were busy making ducklings. They seemed to know what they were doing. 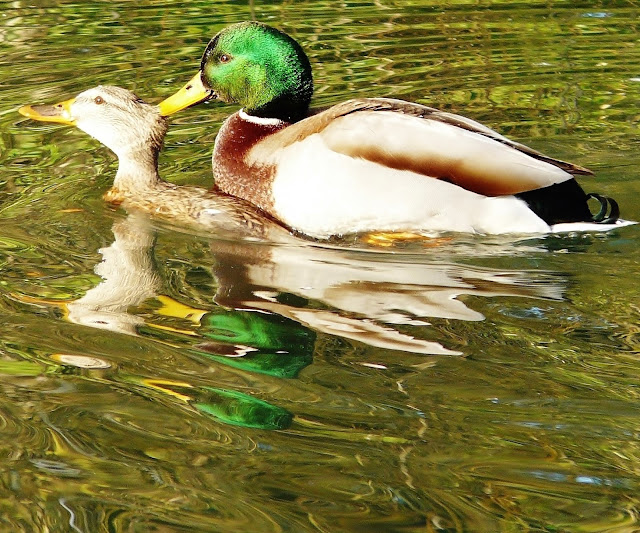 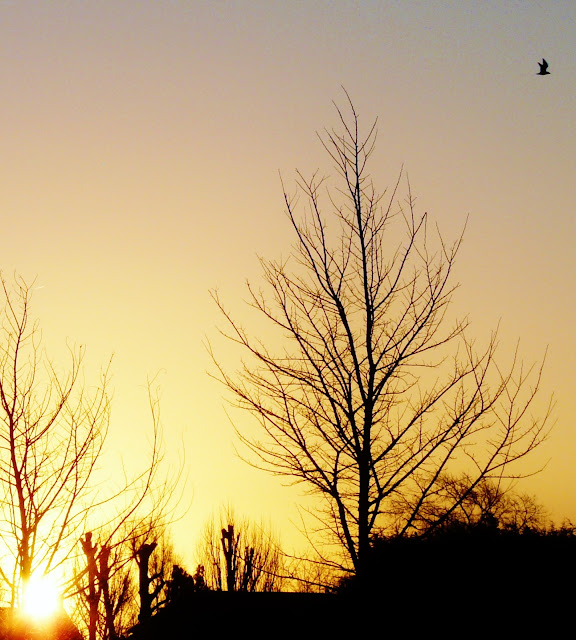 Later that day I got the following, more abstract view of a tree in my village: 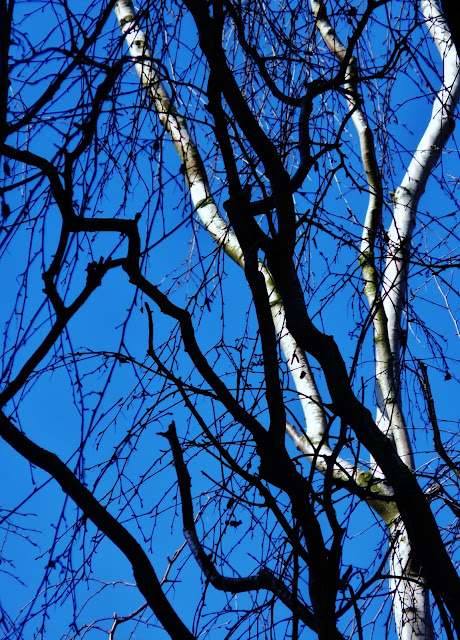 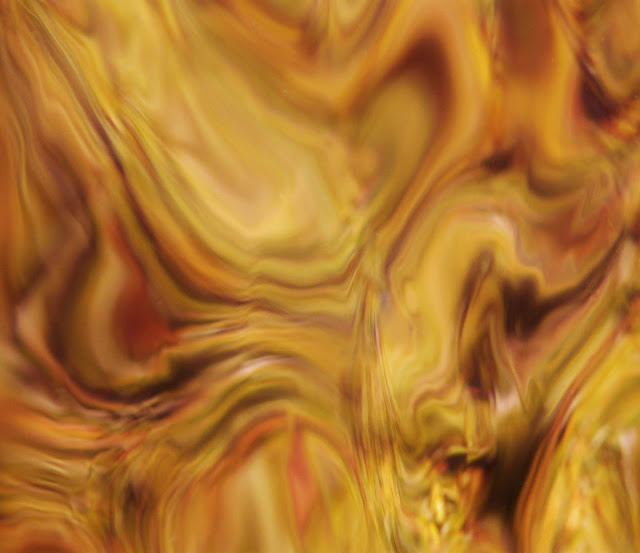 (willow branches reflecting off the surface of the village duck-pond)
Posted by Martin Cooke at 1/23/2020 No comments:

In April 2014, I was out in the garden photographing non-native bluebells. They had attracted me outside because they were back-lit by the morning sunlight. When I turned to go back inside, I noticed this fledgling, watching me from the hedging. I slowly lifted my camera and the automatic focusing of my Lumix FZ18 worked like a charm: 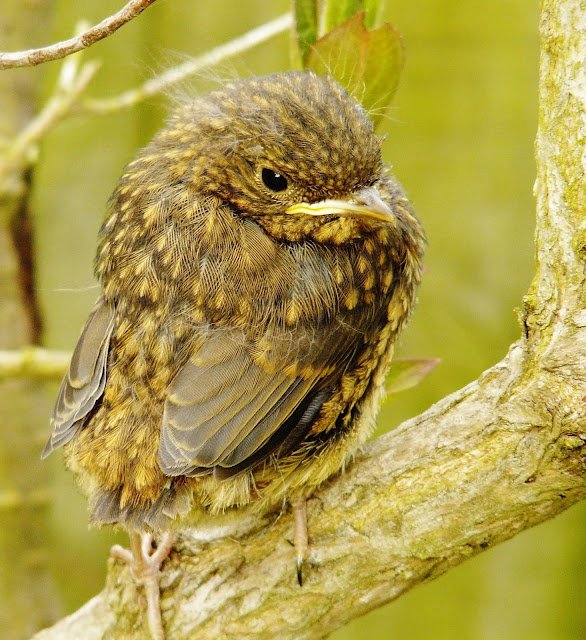 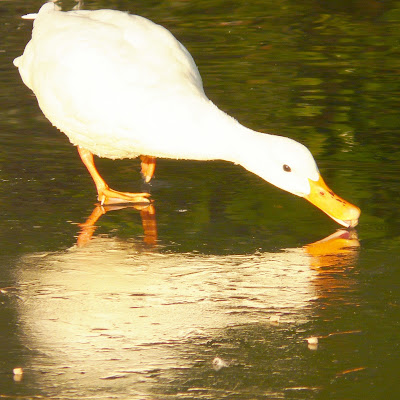 In November, the pond had been a lot wetter... 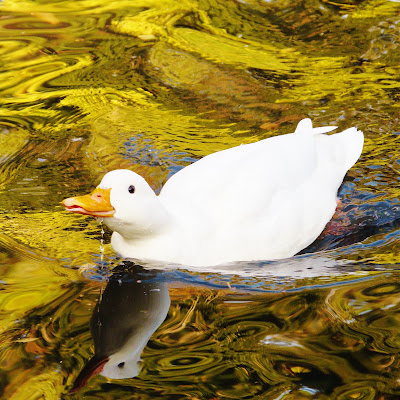 And in July, the pond had been reflecting greenery... 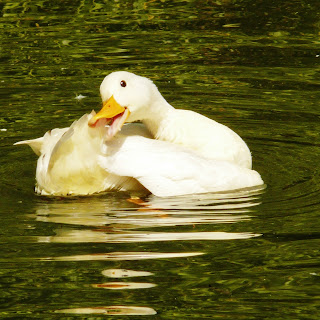 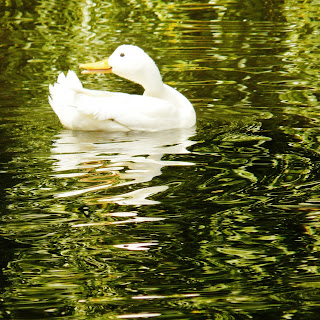 In May, Custard had been much fluffier... 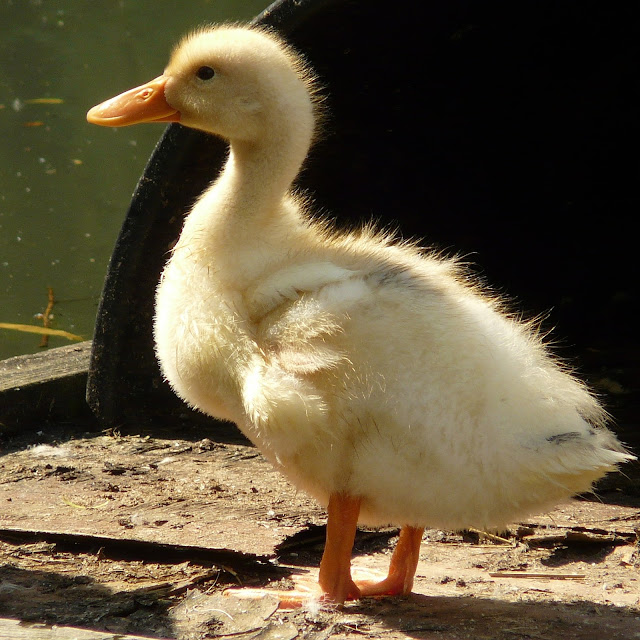 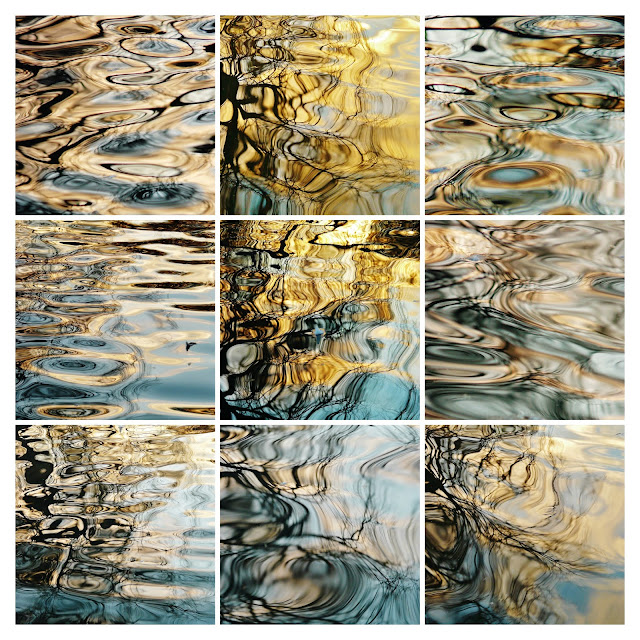 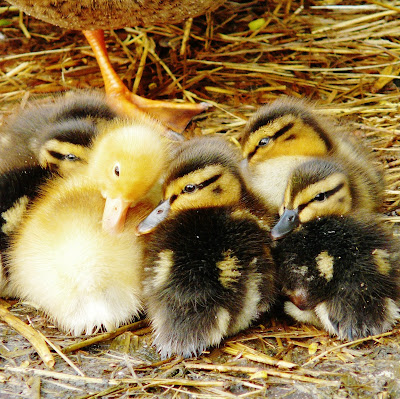 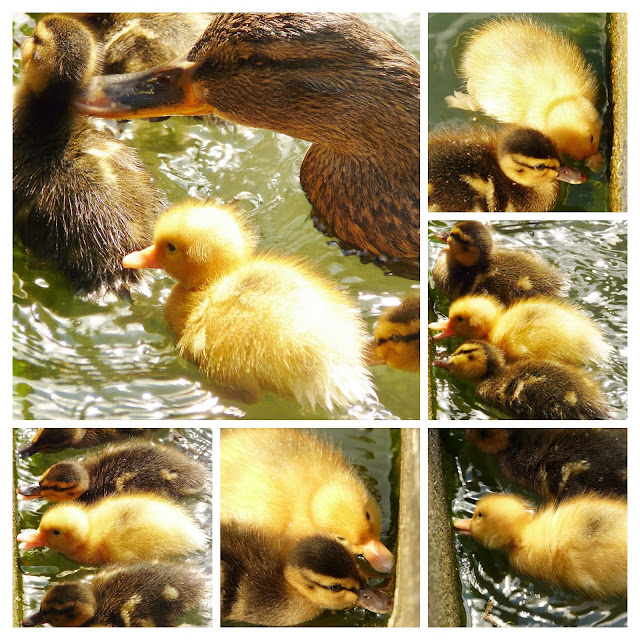 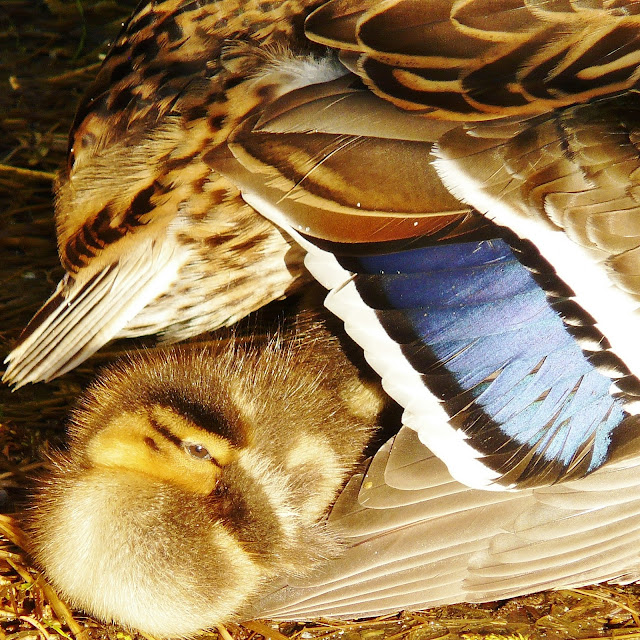 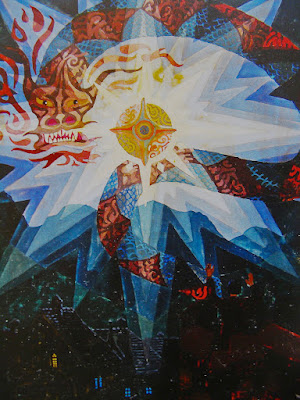 This is a picture from Carl Jung's Red Book (which I just heard about via the blog that nobody reads); here is the picture in the book: 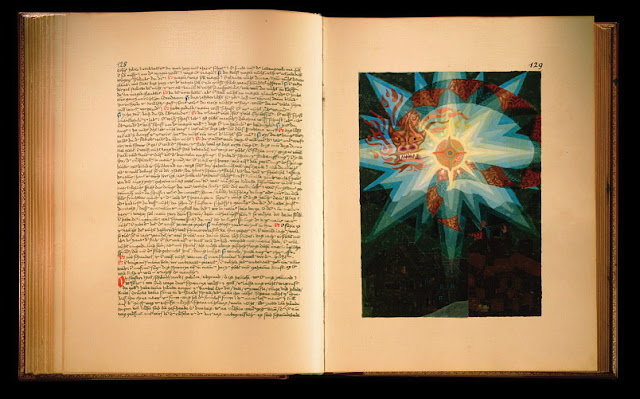 the pintail was still on the village duck-pond... 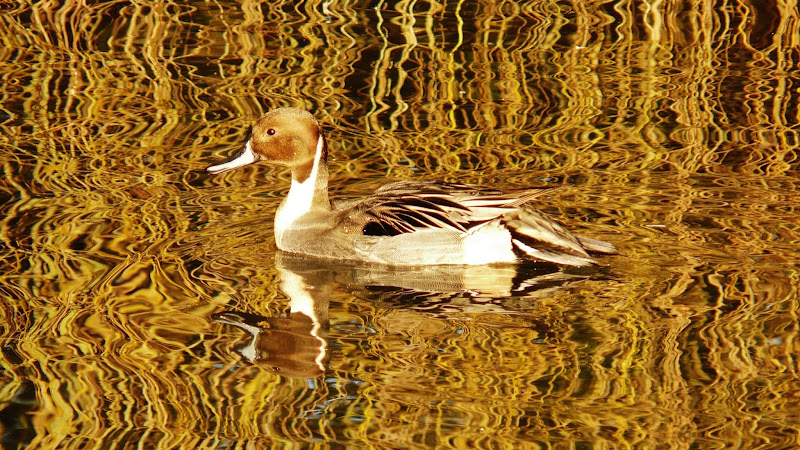 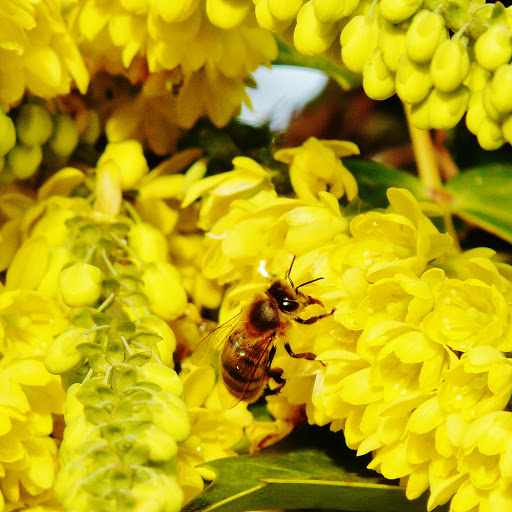 Without the duck, and turned on its side, it becomes an abstract photograph! 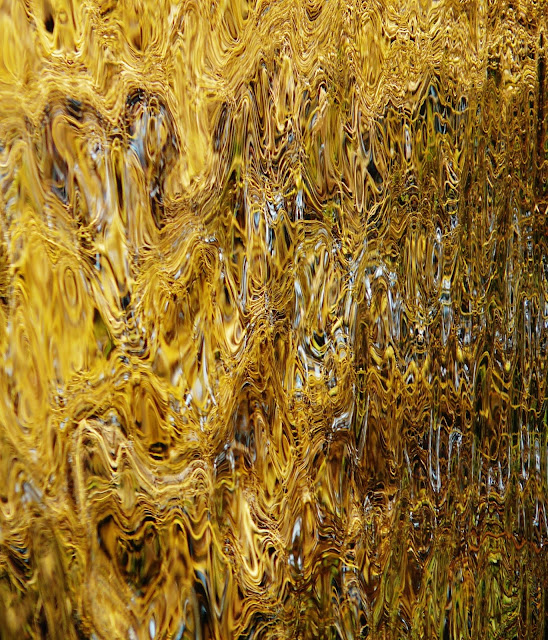 on the village duck-pond, there was this duck: 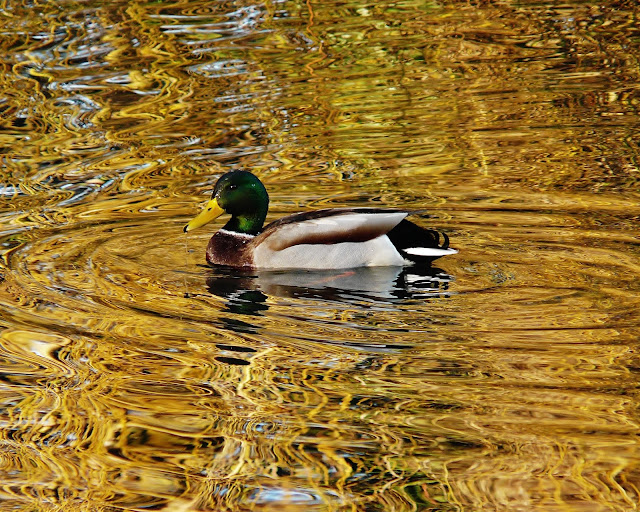 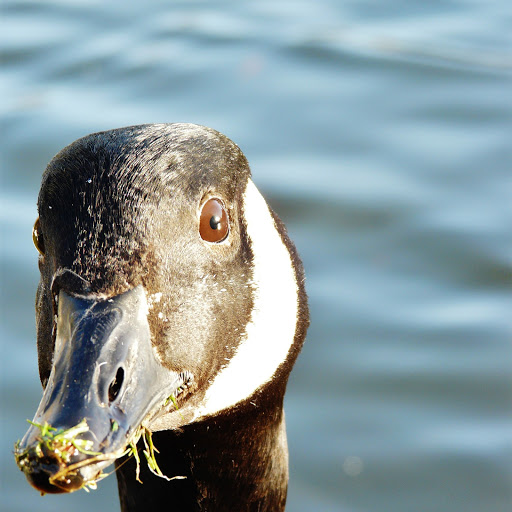 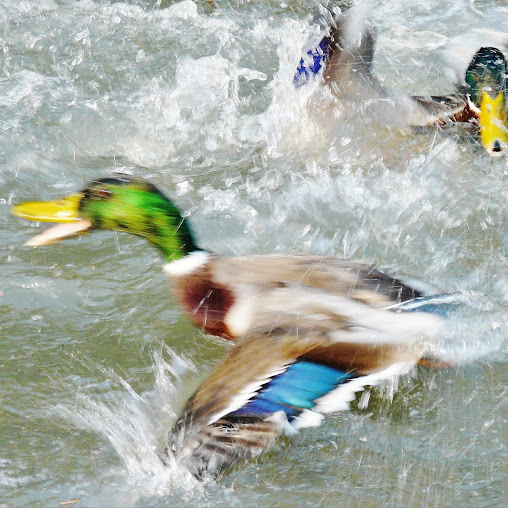 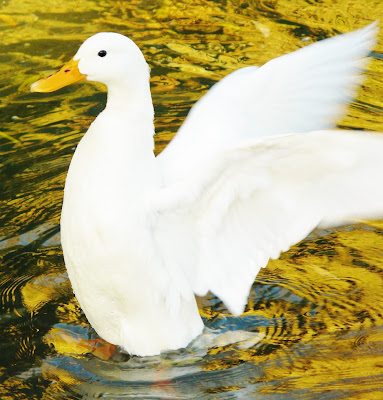 Another of Custard's baby photos below, and above: when she was a young adult 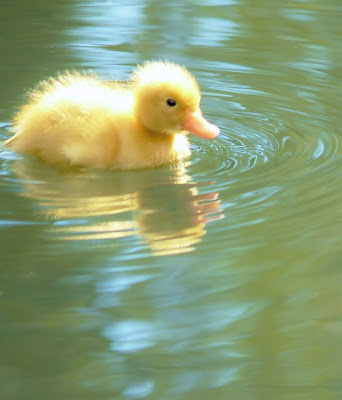 The Discovery of "Custard" 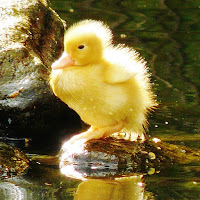 
Three years ago, I was photographing the village duck-pond.

A leucistic female mallard had hatched out in April 2016, looking very cute and yellow. The village called her "Custard" and I took a lot of photos of her, the best of which I shall dig out and process and post here later (at the time I was sharing them on google+).

By January 2017, I would have been at a loose end had it not been for this unusual arrival: a male pintail. He was able to fly, but he stayed for a few weeks. Villagers feeding the adorable Custard would feed him, and it was Winter, so why not? 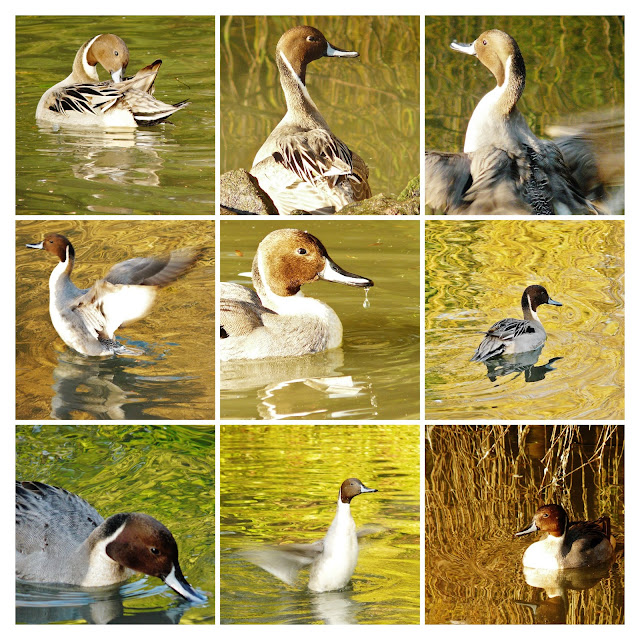 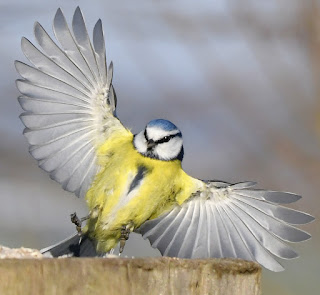 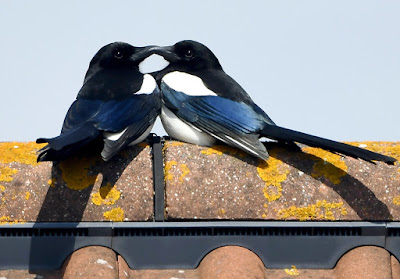