In times of uncertainty...

Lucy Jones, In times of uncertainty, let nature be your refuge (The Guardian, Friday 20 March 2020)
I took the photo below, of a collared dove in a cherry tree (on a road in my village), on 20 March 2015: 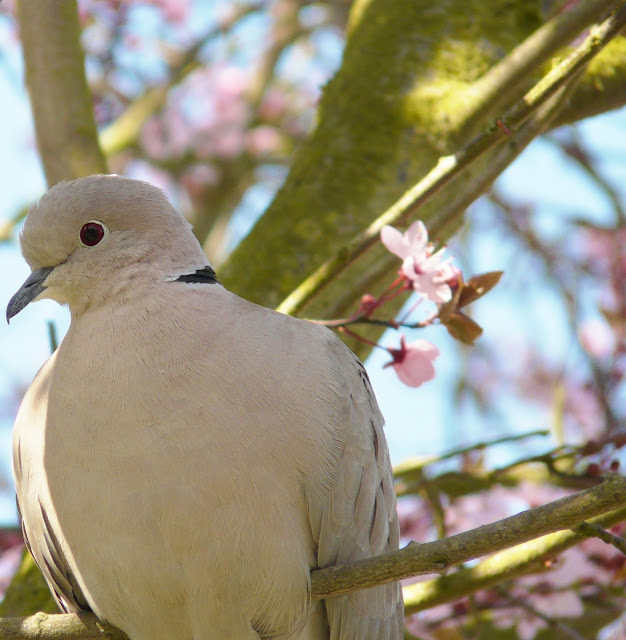 The Wages of Sin

Had we done the right thing, we would not be paying such a high price now.
We knew that aviation fuel was bad for the environment (not as bad as our cars, which we can carry on driving because they will soon be green, and the economy makes us drive them, and they are not as bad as China, and so forth), and hence bad for us all; but we loved our cheap foreign holidays, which do seem to have been a vector in the spread of this pandemic.
I can hardly blame people for wanting to escape their boring jobs (in the economy that is howsoever they vote for it to be) and boring houses, can I? But the solution would have been more meaningful jobs, and houses with gardens. And we are all going to be paying a higher price now, for all those cheap foreign holidays. The world economy is going to be damaged by what needs to be done to limit the pandemic to something that austere public health services can cope with (health services paying for the effects of the work that we told our bankers to do). And that will have political consequences, with further costs, et cetera.

The problem was political, and the solution is therefore political. We should stop voting for scapegoats. Voters should take responsibility. Each individual voter can do that. And it obviously does add up, one way or another. Two-party politics is a social machine, whose cogs are jobs. The people filling the jobs can change, but the jobs are defined by wider forces. And yet, the world clearly can change. The world moves with the unstoppable force that caused such changes as this world coming from nothing in the first place.
Posted by Martin Cooke at 3/18/2020 No comments: