a honeybee favoured the cosmos 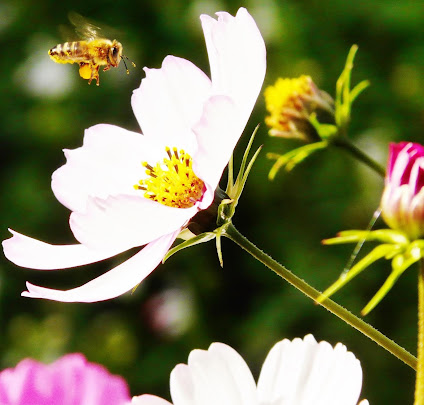 it was Trump and Mrs. Clinton, slugging it out.
The general feeling over here was that Mrs. Clinton was a shoo-in. Indeed, her supporters called her "the only qualified candidate." But while she was certainly the most experienced candidate, I wondered at the time whether her experience would disqualify her, in the minds of a lot of the voters. Would they not feel that her two terms in the East Wing meant that her standing for president went against the spirit of the Constitution (amendment 22)?
To see why, suppose it had been Mr. Clinton in the East Wing for eight years, and that he had later stood for president. And further suppose that he had won two terms, in the second of which he had divorced Hilary. If he had remarried, and the new Mrs. Clinton had become president, he would certainly have looked like President (for ever) Putin.
As it is, of course, Trump won. "Will the same thing happen again this time?" the liberal elite wonder. Now, I don't see how it could. Neither Mr. nor Mrs. Biden have been president before. Nevertheless, if the liberal elite of America do not even know how America thinks about the unity of married couples, then how qualified could any of them be, to embody America, as its (necessarily short-term) president?
Posted by Martin Cooke at 10/12/2020

Interesting thought but I would disagree. Conservative America was reeling from a two term black president. The idea that the first black president would be followed by the first woman president was simply too much to be borne by them. tRUMP is nothing more than a slap back at that by the basest of our country's people. I believe that Hilary's strong polling led people to approach the election mired in their complacency. Of course, Hilary would win...she was the only qualified candidate. I believed it too. I worked third shift and when I left for work tRUMP was leading. On my lunch break, the election had been called. My daughter, teaching at the American University of Kabul had left me a message: "WT actual F happened there?" I had to reply, "I don't know. I'll never be able to understand this." This presidency has been devastating for our country. I live in a red county and am often discouraged. I hope that you are right when you say that tRUMP can't win. I lost a 13 year op ed column from my newspaper because I was critical of that awful man. In the end, I figure that if I had to die on a sword, that was a good one. Vote Blue.

Thanks for your thoughts, Debby...

I am glad that people such as yourself would read a blogpost of mine. I think that Trump cannot win, because I do not think that conservative America is as bad as the most vocal liberals enjoy painting it. Although I must admit that you would know better than me about that..

In 2003, I was published in the British Journal for the Philosophy of Science, although I've done little else (click on that "done" for what I have done). In 2007, I joined Blogger. I called myself "enigMan" (a "Meaning"-full name). There were some lively philosophy blogs on Blogger in those days.
In 2014, bored of analytic philosophy, I changed my hobby to digital photography, taking photos around my village and sharing them on google+, the videos on YouTube. In 2018, as google+ faded away, I decided to write up my philosophical results, which had been congealing on the back burner. I am currently rewriting them, as a book..

Other People's other stuff